Since my first days here in London I received via mail or digital download many records kindly provided by musicians residing in different parts of the world. While waiting for the issuing of an extended analysis for each one on a webmagazine, I decided to start an overview here on london_resonance, just curious about their matching with the live reviews for London-based listeners, while at the same time trying to shorten the schedule.

Wozzek is basically the duo of Belorukov (prepared/processed alto sax, ipad, objects) and bassist Mikhail Ershov, and through his three major releases and many eps since 2007 evolved from the initial jazzcore influenced by Painkiller, Zu and Diskaholic Anonimous Trio up to this first physical publication, accompanied by a beautiful booklet in which Victor Melamed is responsible of hypercinetizing Frank Miller, while the 47 small compositions for an amount of 23 minutes are the soundtrack the duo, with the addiction of Dmitriy Vediashkin on electric guitar, Dmitriy Krotevic on trombone, Maria Grigoryeva on violin, and Mikhail Tsypin on voice, is providing for it. Splinters of sound, of voices, of onomatopoeias. Classic Guide to Strategy and Raymond Scott are the obvious references, while the second, ten minute track - actually a remix of the first - is made of a more wide and stretched landscape, as if Popol Vuh were playing found objects.

Jason Kao Hwang, recently granted by Downbeat with the second place as 'Rising Star of Violin' and a 'reissue of the year' by the New York City Jazz record for Commitment: The Complete Recordings 1981-1983 (NoBusiness, 2010), issues on Euonimous Records the Edge quartet's Crossroads Unseen and the Spontaneous River ensemble's Symphony of Souls.

Edge are Taylor Ho Bynum (cornet, fluegelhorn), Andrew Drury (drum set), Ken Filiano (string bass) and Hwang (composer, violin, viola) providing a buch of compositions whose feeling and spirit is what the New York loft season produced at his best (with Henry Threadgill's Air as the main possible reference, if one). Long time associated with William Parker, and responsible for a quite different style from Leroy Jenkins, the main reference for improvising on violin, full of Asian colors without being ethnic - a subtly asian-tinged use of space, sensitive as far as harmonic and melodic architectures and interplay, Hwang and his fellows are responsibles for a music beautifully cooked up, revitalizing a tradition of free improvisation in showing us the single improvisers shifting their dialogues with fluency and sharpness, cinematic devices and a title track worthy of being listed in a forthcoming best of 2011. 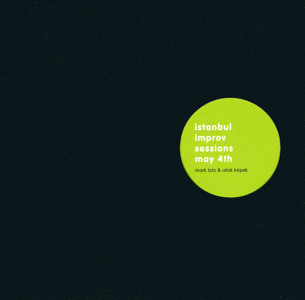 I talked about Islak Kopek on Allaboutjazz months ago - skim through it and pick up what you want directly from re:konstruKt digital label after reading, so I'm happy to introduce a record (Istanbul Improv Sessions 4th May, Evil Rabbit Records, 2011) made by the first improvising group active in Istanbul since 1995 added with flutist, improviser, composer Mark Alban Lotz.


While I'm planning to put down a retrospective on the activity of the band via an interview with Korhan Erel, I'd like to point at the fact that the music herein is an excellent document of the different approaches to composition and improvisation of the group - basically electroacoustic improvisation with a 'chamber' approach, since the fourtheen small pieces, from 1 to about 5 minutes - are featuring different combinations of musicians. Kevin Whitehead in the notes writes about a cosmic sound carrying with it balinese gamelan, senegalese drumming, navajo and bulgarian and australian aboriginal singing, peruvian pipes. That means that one of the best quality of the record is being higly evocative. I would add that the best moment here is Our, an explicit, moving dedication to Albert Ayler and to the 'speaking in tongues' era, and an indication on how a group of musicians can bring together non idiomatic expressions and a well rooted sense of what dealing with structures mean.